There are no active performances for this event!

Probably many of you are wondering what’s happening in the dark depths of the ancient tomb in 2014, right? The time has come to reveal the mystery of darkness. Ironbridge, Shropshire, is a village in Albion which has the reputation of being the birthplace of the Industrial Revolution two centuries ago, now no more than a tourist attraction, of course, but people there still have the tamed iron in their blood. But enough history, what you need to know is that Ironbridge is also the place where one of the solid death/thrash bands of of the glorious late ’80s came to being, down the pub as they themselves say – a band that most of you know by the name of CANCER!

The band, consisting of Carl Stokes (drums), John Walker (guitar / vocals) and Ian Buchanan (bass), came out quickly in the British underground, so after the first two demos CANCER already shared the stage with names like Bolt Thrower, Cerebral Fix or GBH.

It didn’t take long for record label to offer a deal, so the first CANCER album is released to the eager audience at the time of the new wave of extreme metal, entitled “To the Gory End”, produced by the legendary Scott Burns. The rest is history. Tours followed, alongside Deicide or Obituary. The second album, “Death Shall Rise”, is a metal gem with ferocious riffs, that crushing style reminiscent of Death’s “Leprosy” and Sepultura’s “Beneath the Remains”, a rabid wolf’s voice, vehemently denying life, brought to another level by the presence of James Murphy, invited for the guitar solos, the band now having cult status in the metal world and history. The third album, “Sins of Mankind” (1993) album continues the previous line, strengthening the position of representative death metal band in the golden period of this so beloved, tried and sturdy genre.

After a confusing period in which they split up twice, the band reunited in 2013, lining up John Walker, Carl Stokes, Ian Buchanan and Barry Savage and now threatens to obliterate the stage with their destructive riffs, supporting the re-release of the first three albums, with the promise of only playing songs from these materials.

In their journey to storm the world stage, RTMC proposed and obtained a place on the massacre map, with a show to tell your grandchildren about, that will take place at the Old Grave Fest 2014 – Romanian Thrash Metal Fest 3rd Edition..

The veterans in Cancer will be joined by new blood from Austria, recently congealed under the name Deathstorm. Their debut EP in 2011, “Storming with menace”, named after the classic Kreator song, indicated pretty clearly the musical house our Austrians belong to, while the full-length As Death Awakes, released last year, consolidates the approach: savage, teutonic thrash metal, early Kreator style (’85-’87), but not totally devoid of equally malefic North-American influences, such as Morbid Saint, Sadus or Dark Angel. One significant credential comes from Fenriz of Darkthrone, whose blog warmly recommended Deathstorm back when their album was released, the thrashers becoming the first Austrians to garner the already famous title of Fenriz’s BAND of the WEEK. And we, at RTMC, guarantee a frantic headbanging at the first riffs of Deathstorm’s set. Unless you’re plain deaf or suffering from spondylosis.

More info about the fest: 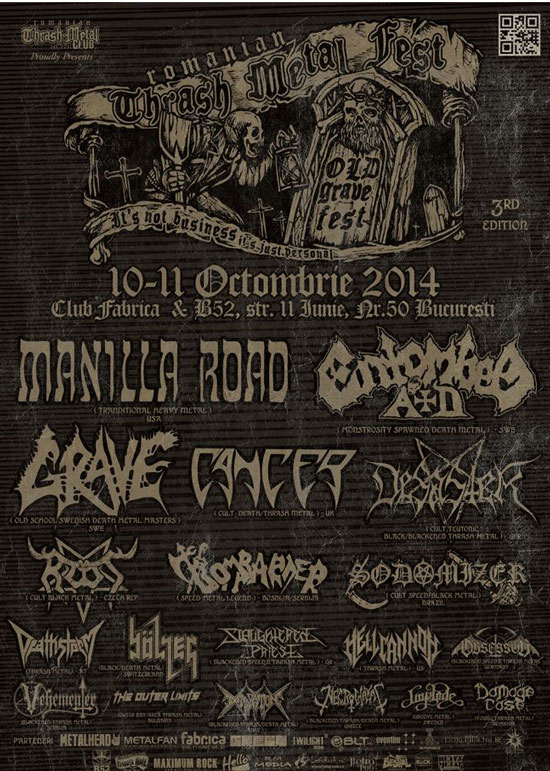 Add Eventim website to your homescreen for better performance and App-like experience.

Get special offer notifications to your device

Receive notifications about rescheduling, cancellations and other changes to your device